Crowds gathered around the Donhwamun Gate on Saturday to watch King Jeongjo’s Royal Parade kick off from Changdeokgung in Seoul.

After three beats of the drum, marchers dressed as soldiers and courtiers lined up in front of the gate for a ritual. King Jeongjo then made his appearance through the gate. Following the king was his mother, Lady Hyegyeong, who accompanied him on the journey to Yongneung, the royal tomb of Crown Prince Sado — King Jeongjo’s father — in Hwaseong City, Gyeonggi Province.

Reenacting the historic royal parade that took place in 1795, the entourage set off at Changdeokgung and coursed through areas of Seoul on Saturday. 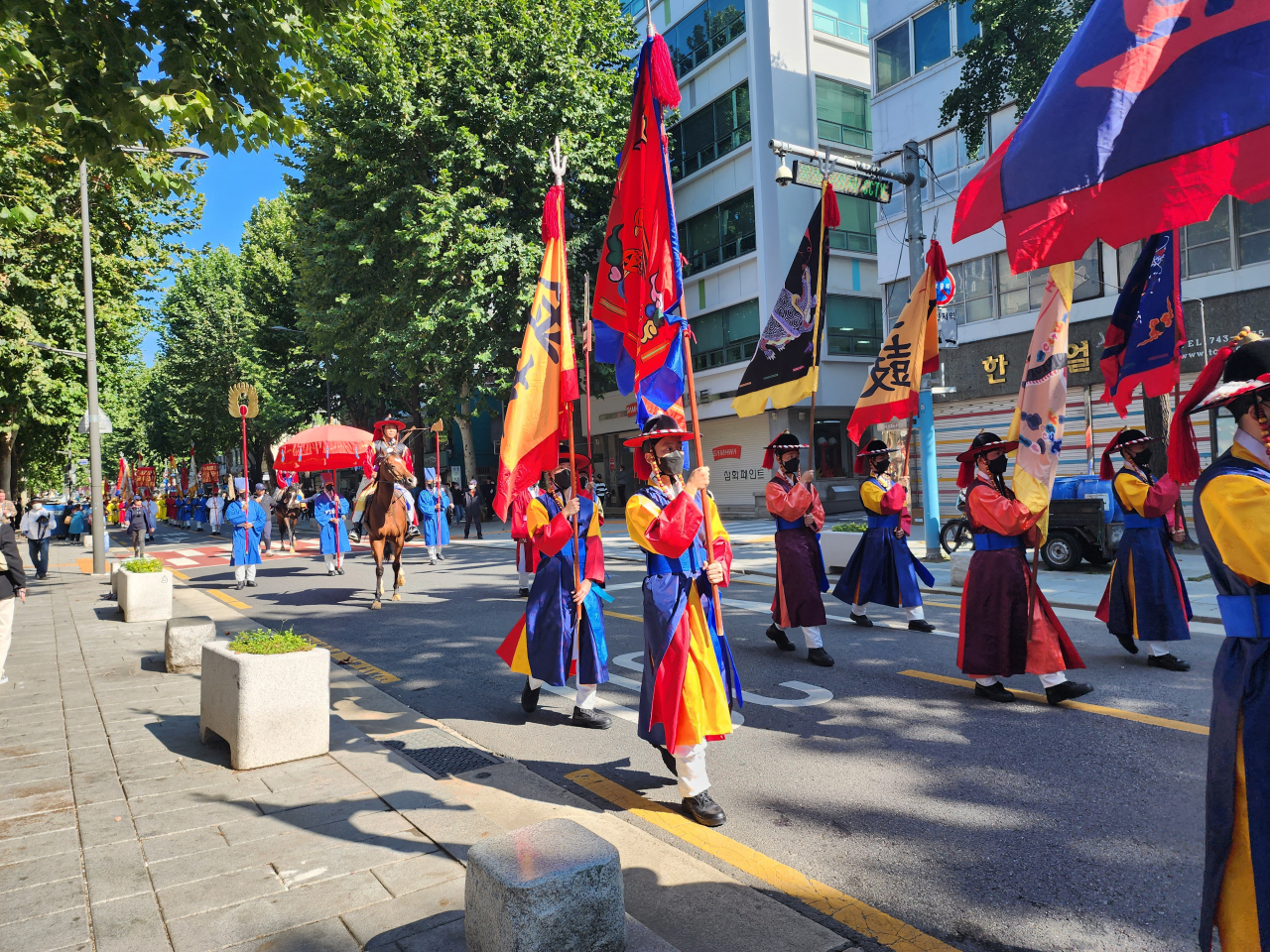 In the first section of Seoul’s parade, a total of 200 people and 20 horses marched on Yulgok Street, keeping pace with the sound of “daechwita,” traditional military march music.

King Jeongjo waved to cheering spectators on the streets while riding on a white horse. Lady Hyegyeong, seated in a palanquin, also waved through the window.

The king did not sit in a palanquin, as he did on regular royal outings. Instead, he rode a horse and followed his mother’s palanquin to take care of his mother closely during the original eight-day journey undertaken to celebrate her 60th birthday. King Jeongjo’s royal parade is often cited as an expression of the king’s filial piety.

Upon reaching Gwanghwamun Square, King Jeongjo treated Lady Hyegyeong with a bowl of thin rice porridge. After the meal, a traditional “narye” rite, a ceremony to ward off evil spirits, was performed to bid safe journey. Families with children clapped along to the rousing rhythm of kkwaenggwari and janggu, and gasped when three giant lion-masked dancers pranced and danced around.

At around noon, another group of 200 people gathered on Nodeul Island for the second section of the parade.

Before setting off, King Jeongjo met with his people in a “gyeokjaeng” performance, where a person hits kkwaenggwari to talk to a king and ask for a solution to an unjust situation. One performer implored the king to help her because life is too difficult due to the pandemic.

Records show that King Jeongjo dealt with 3,355 civil cases during his royal visits. Among them, 1,100 cases were solved during the visits to Suwon, according to the Suwon Cultural Foundation.

Many of the events scheduled in Suwon on Sunday were canceled due to rain which began in the morning and became increasingly heavy through the course of the day. Yet many spectators waited in the streets to see King Jeongjo’s parade.

In front of Janganmun Gate, the main gate of Hwaseong Fortress, a total of 2,500 people with 325 horses — participated in the highlight of the reenactment.

A series of groups formed a long line of the parade: The first group with flags signaling the parade marched on, followed by the daechwita troupe dressed in yellow costumes and soldiers in different suits.

When King Jeongjo appeared at Janganmun Gate, people cheered, clapped and waved, taking photos and videos of the king in a military uniform.

The troupe taking part in the final section of the parade marched about 3.1 kilometers from Suwon Sports Complex to Yeonmudae Post, a military observation post at the fortress.

“The parade was absolutely amazing. I could appreciate the culture and its beauty. I enjoyed every moment of it. And I appreciate everybody coming out even though it was raining,” said a member of the US Air Force living in Suwon who participated in the parade as a Joseon soldier dressed in a traditional costume. She was one of some 50 foreigners who were spotted taking part in the parade.

A Korean participant who carried the palanquin of Lady Hyegyeong said, “It’s my first time seeing (and participating in) the royal parade because I’ve moved to Suwon just two years ago. It was fun even though it was raining, a lot of people came out. … I could appreciate the history and culture that I didn’t know before.”