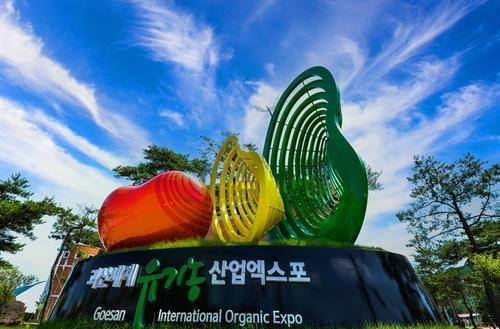 The 2022 IFOAM-Goesan International Organic Expo kicked off in Goesan, some 160 kilometers south of Seoul, on Sept. 30 for a 17-day run with the aim of highlighting the importance of organic farming and boosting related industries.

The expo, co-hosted by the provincial government, the Goesan County government and the Germany-based IFOAM-Organics International, drew officials from 427 research institutes and companies from 66 countries specializing in organic goods and other eco-friendly products.

Organizers said this year’s event has served as a stage for contributing to carbon neutrality and the balance of ecology, while confirming the healing function of organic farming.

“The expo is meaningful in that it has enabled the Goesan county and North Chungcheong Province to emerge as the center of South Korea’s organic farming,” an organizing committee official said. “More efforts will be made to further promote the industry.”

The committee earned nearly 3.2 billion won in revenue, including entrance fees, with the signing of 22 export deals worth 9.8 billion won ($6.8 million).

In addition, about 1,900 experts from 36 countries held 18 symposiums during the event to exchange information on organic farming, with 514,000 visitors signing a pledge for the realization of carbon neutrality.

Organizers said the fulfillment of their pledges would help reduce 720,000 tons of carbon dioxide emissions per year.

The organizing committee also said this year’s expo has served as a guide for post-pandemic international events by holding a metaverse-based online expo, which has drawn some 68,000 visitors from abroad.

This year’s expo has generated nearly 120 billion won worth of production, created roughly 1,000 jobs and drawn interest in organic farming, which could lead to related government policies or infrastructure investment, according to organizers. (Yonhap)