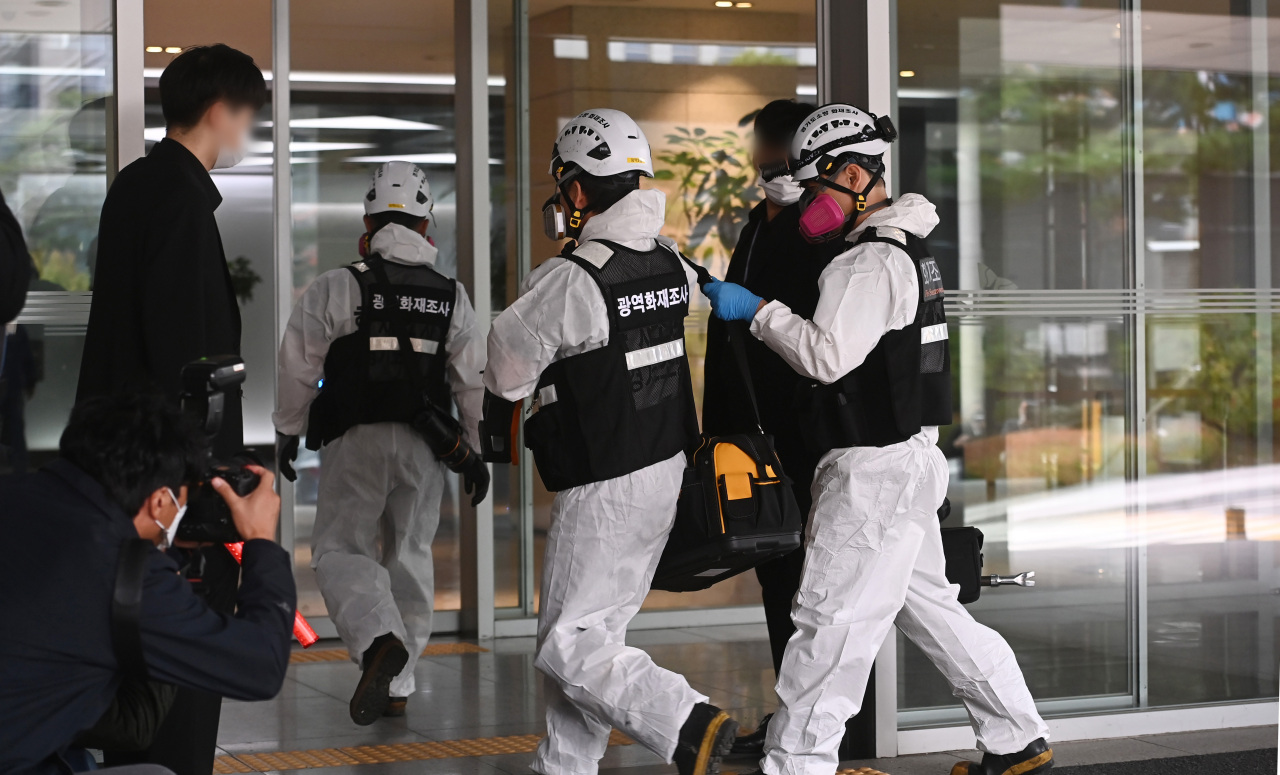 A day has passed since the server outage caused by a fire that broke out Saturday afternoon at a data center housing servers of the nation’s two tech giants Kakao and Naver, but many of their popular services remained limited as of midday Sunday.

It is the third service malfunction this year alone and the longest-ever system failure since it first opened service in 2002. The last system error occurred 11 days ago.

Kakao co-CEOs Namkoong Whon and Hong Eun-taek released a statement late Saturday night that said: “Thanks to the fire authorities, the fire was put out, but it is difficult to immediately power up the center (and fix the malfunction) due to safety reasons.”

Namkoong and Hong said the tech giant is making efforts to restore its services by using other data centers which are responsible for data backup. “But it is taking more time than expected because it is an unusual case for a whole data center to be affected,” they said.

According to local media reports, SK C&C said power supply was restored by more than 90 percent as of 9 a.m. Sunday.

But a Kakao official told The Korea Herald that the company cannot predict when KakaoTalk and other services will be completely restored. Currently, the messaging app can only send and receive text messages, but not photos and videos.

Experts say the recovery process from the server outage is being delayed because Kakao does not operate its own data center, and outsources data storage to other companies.

“If Kakao had directly operated its data centers, it would have followed a business process contingency plan (BPCP) and disaster recovery planning (DRP) measures to prevent the complete shutdown of services,” said Kim Myung-ju, an information protection professor at Seoul Women’s University. According to Kim, BPCP refers to the ability to continue operations even under disastrous circumstances, while DRP means the ability to recover from disasters.

Kim pointed out that instead of building a costly data center, Kakao chose to use SK C&C’s data cloud service, which evidently failed to adopt the two disaster countermeasures.

“Both SK C&C and Kakao are accountable for the server outage. SK C&C, as the actual data center operator, and Kakao, a party who did not have a thorough contingency plan, despite its 12 years of digital service,” added Kim.

Unlike KakaoTalk and other affiliates, Kakao Bank, which has its own data center, said it had a partial disruption for only two hours and that its server was immediately restored. Naver said some of its services were temporarily unavailable, but most of them returned to normal on Saturday.

When asked whether the data center in Pangyo is the company’s main storage center, the Kakao official declined to comment.

President Yoon Suk-yeol on Sunday raised the alert on the matter and said in a statement: “I feel very strongly about inconvenience to users and the damages caused to them by the system failure of Kakao and Naver. I urge the authorities to help Kakao and others speed up the restoration process.”

After visiting the SK C&C data center at around 10:30 a.m., the Science and ICT Minister Lee Jong-ho said in a statement: “Value-added telecommunications services (all services beyond voice calls and fax) have been considered less important than standard telecommunications services.” He added: “But like we experienced yesterday, if the services’ stability collapses, it can go well beyond daily inconveniences and paralyze (the nation’s) economy and social activities.”

Minister Lee urged Kakao and Naver to “go back to the basics” and take responsibility for providing stable services.

Sources say the government and tech industry should accelerate movement to pass a bill that proposes data centers be included in disaster management. Proposed in 2020, the bill holds data center operators responsible for protecting key data to prevent disasters.

The bill came two years after a fire broke out in the basement of local mobile carrier KT’s communication facility in Ahyeon, western Seoul, in 2018. However, it was thrown out by the Legislation and Judiciary Committee of the Congress, despite the Science Ministry’s pushback.

In terms of compensation, Kakao said restoring its server is the priority, after which it will look into reimbursements after estimating the damage.

Since KakaoTalk is a free messaging app, there are no legal grounds for the company to offer financial compensation to users for damages incurred from failing to send or receive messages, sources said.

But in case of apps that charge subscription fees, Kakao is highly likely to roll out reimbursement measures for such users. Melon, Kakao’s music streaming service operator, announced Sunday through its app that it will provide three days of free subscription service or give out 1,500 won ($1) in cash points to subscribed users.