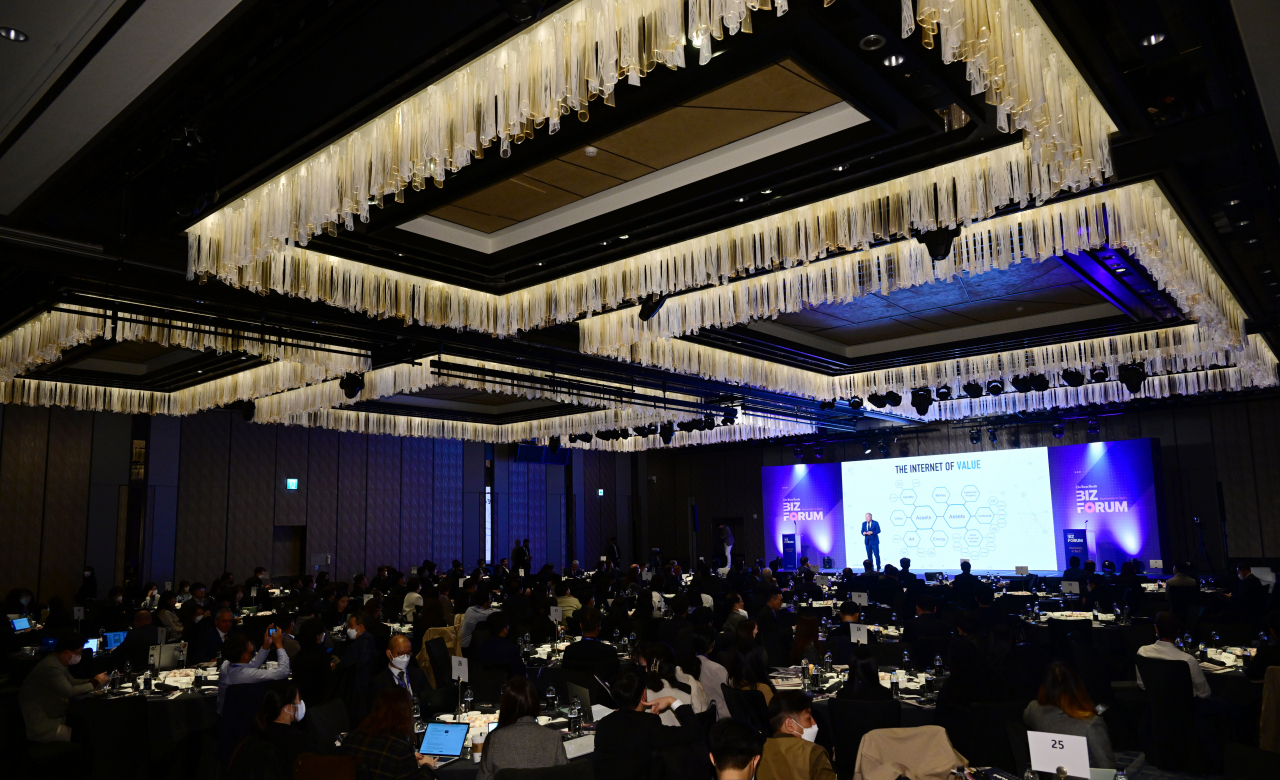 Advanced technologies empower humanity in the long run because they lead to greater freedoms to shape identity, reduce labor and fight diseases, as blockchain, artificial intelligence, robots and mRNA vaccines deliver the means to enhance life in the digital age, experts said Wednesday.

“We need a new social contract for the digital age,” keynote speaker Don Tapscott, executive chairman of the Toronto-based Blockchain Research Institute, said at The Korea Herald Biz Forum held at the Four Seasons Hotel Seoul with some 500 policymakers and industry leaders in attendance, under the tagline “Humanity in Tech.”

Blockchain — a record of transactions kept on networked computers serving as a public ledger — is the recent medium that makes individuals “self-sovereign” in deciding who they are without outside intervention from corporations or the government, because blockchain hacking is nearly impossible, according to Tapscott, who authored global bestseller “Blockchain Revolution.”

A self-sovereign identity is the foundation of not only freedom, but a whole new economy that entails “job prosperity” amid a global rush to building the “next-level blockchain ecosystem” — opening the second era of the digital age — Tapscott said, adding that South Korea could lead the transition by example.

Kim In-hwan, chairman of BOSagora Foundation, delved into the future of the blockchain itself — one where it will sit atop the third generation of the World Wide Web, complementing the way work is done.

Alan Jo, chief product officer at AI investment firm Qraft Technologies, said artificial intelligence will do more than change how work is done; it will reshape the entire process, albeit slowly and in stages. AI machines, Jo said, are better than humans at solving what he calls “nonlinear problems,” because they can study pools of data at unmatched speed and depth.

“Finance is only one example of where we see such problem-solving taking place,” Jo said, noting AI could not only help people to reduce their workload, but make better use of work hours to refocus on tasks that that require intuition. Locus X CEO Baek Seung-yeop expanded on the AI discussion, demonstrating what a virtual human or influencer, for example, could do in sectors other than finance, such as in the entertainment industry.

To deal with an aging workforce in particular, Lee Jung-ho, co-founder and CEO of Rainbow Robotics, presented steps involving what he calls “collaborative robots” to meet the increasing demand for work support. The workplace is just one example of an area where “a group of diverse robots” can provide help, Lee said.

And life with AI should be more inclusive and sustainable, said Sung Nako, who heads internet giant Naver’s AI platform Clova. Utilizing AI to reach out to the marginalized is one way to realize that potential, Sung noted.

The forum also discussed the COVID-19 pandemic — the source of unprecedented disruptions to the global economy over nearly the last three years. As special speakers, Robert S. Langer, co-founder of US vaccine maker Moderna, and Jerome Kim, director general of the International Vaccine Institute, laid out the challenges and opportunities for mRNA vaccines.

“It is what I would call a disruptive change,” Langer said, referring to the speed at which vaccines were rolled out thanks to efforts by companies and governments alike to combat the pandemic. “Normally it takes enormous amounts of time to do that. It’s a combination of both a whole new science, a whole new way of doing things speedwise.”

“I don’t think we can ever expect that we’re going to see the kind of innovation without funding,” Kim said. “High-risk, high-yield science” is a lesson to guide the world in the battle against smaller diseases still putting people at grave health risk, he explained.

Meanwhile, the forum touched on how technological progress will play out through human communication. Curious Brain Lab CEO Chang Dong-seon, whose expertise lies in cognitive and behavioral sciences, discussed cultural evolution — a concept that credits human development with people-to-people exchanges through language and behavior in the name of culture, rather than biological evolution or a change in traits over successive generations.

Blockchain and artificial intelligence will facilitate such cultural evolution — and the metaverse accelerates it — Chang said, pointing out online spaces in which users or characters are no longer bystanders looking over multidimensional interactions, but where they become participants engaging in entirely digital experiences. The reliability of information communicated there, however, needs to be held in great check, he noted.

Metaverse pioneer Joel Dietz, founder and CEO of MetaMetaverse, offered his insight into where digital business is headed for now and decades to come. A change in the way people communicate with each other, synthesize information and bet on what the future holds is on the horizon, Dietz said.

“A global tech fight to gain an upper hand is where we’re caught, and we’d like to hear what the forum has to say about what we should do in response,” Han said in a video message.

“Pursuing an edge or competitiveness is not some zero-sum game that leaves one flourishing and the other deserted,” Rep. Yang said. “We’re in this together, all globally, and if we do it right, technology will help us realize the very values we share and look to.”