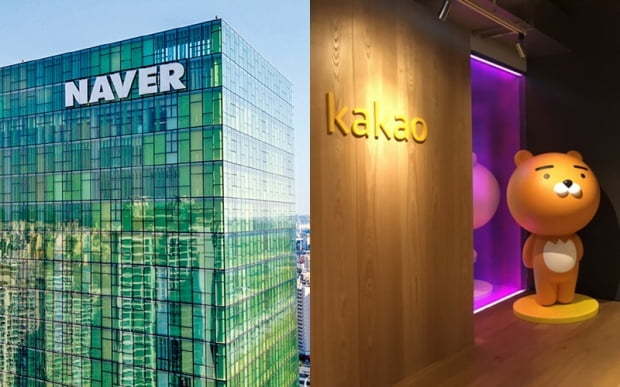 Naver and Kakao, tech stocks that had moved the market during the COVID-19 pandemic, have recently become big disappointments to investors, having lost over a combined 63.3 trillion won ($44.4 billion) in market value since the beginning of the year.

Naver’s industry rival and operator of the nation’s most popular messenger app, Kakao’s shares fell some 54 percent — from 114,500 won to 50,900 won — in the cited period. Its market cap shrank from 50.1 trillion won to 22.6 trillion won in the meantime.

The two were among 343 of total 2,531 listed on the Kospi and Kosdaq — accounting for 13.55 percent of the total — that saw their share values halve in the past year, according to data from bourse operator Korea Exchange.

The average 55 percent drop in their share prices in the first 10 months of the year eclipses the benchmark index Kospi’s 25 percent slip from 2,988.77 to 2,232.84 in the same period. The Kospi in recent months has been overall weighed down by risks stemming from the US Federal Reserve’s recent series of aggressive rate hikes to combat high inflation.

In order to recover both their market value and love from investors, the two tech giants must now make game-changing moves to boost their global competitiveness, analysts say.

“Naver’s biggest weak spot is its global influence, but through its latest acquisition of Poshmark, it has gained an e-commerce platform and user base in the US market,” said Ahn Jae-min, an analyst at NH Investment ＆ Securities.

Naver’s decision last week to acquire a full 100 percent stake in US social commerce marketplace for fashion Poshmark for 2.3 trillion won may work in favor of the tech giant in the long term, but the firm’s share price plummeted to a fresh low for the year following the announcement. The share price fell 7.08 percent to 164,000 won on Wednesday, a day after the firm announced the takeover.

“The latest acquisition will lead to a bigger global e-commerce portfolio, but it is inevitable for Naver to be negatively affected by the expected operating loss after the deal is finalized. On top of that, it has already been showing signs of a growth slowdown in its advertisement and e-commerce business,” Ahn added.

Meanwhile, Kakao has been combating risks stemming from subsidiaries including Kakao Bank, Kakao Pay and Kakao Games, as well as hurdles set up by unfavorable market conditions.

Alipay’s move to dump 5 million shares of Kakao Pay in June shocked investors, interpreting it as a signal of weakening ties between the Korean e-payment firm and the Hangzhou-based Ant Group’s payments arm. Alipay Singapore Holding remained the second-largest holder of Kakao Pay, owning 34.72 percent as of end-June.

“Kakao is making efforts to protect its profitability by minimizing its downsizing, its hiring and webtoon marketing as a drop in its ad revenue is expected for the rest of the year,” Samsung Securities analyst Oh Dong-hwan said.

“If the current economic slowdown becomes prolonged, the value of its subsidiaries and affiliates is projected to further drop.”

Naver’s second-quarter net profit came to 158.5 billion won, down 70.7 percent from a year earlier, according to a regulatory filing. Operating profit for the April-June period was 336.2 billion won, up 0.2 percent on-year.

Naver and Kakao were top-performing shares during the COVID-19 market rally here, favored by retail investors seeking to invest in Korea’s own “Amazon and Tesla” stocks.