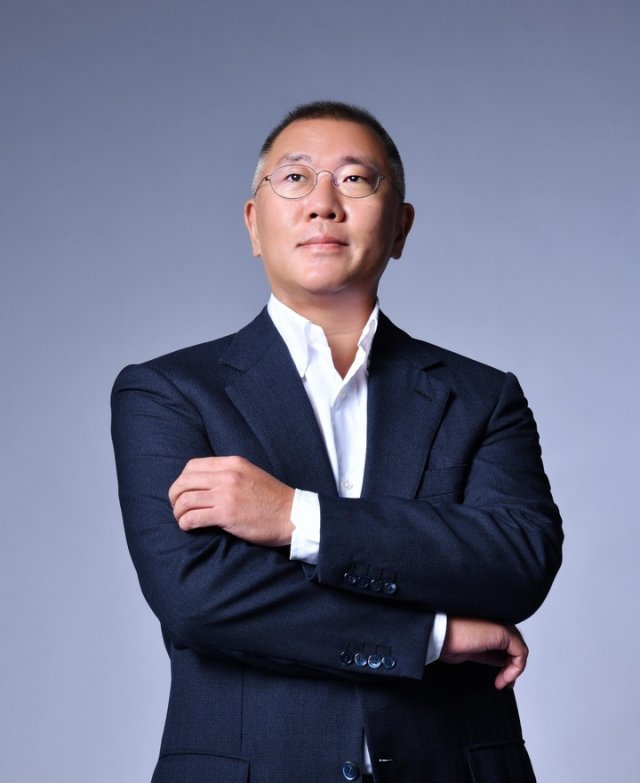 The global awareness of the Korean car brands, however, has changed in recent years with many projecting them today as mobility innovators and a reliable sources of quality. At the center of such significant change is Chung Euisun, third-generation chaebol scion and the son of former chairman Chung Mong-koo, who begins Friday his third year as executive chairman of the 110 trillion won empire.

Under his leadership for two past years, Hyundai Motor has become the world’s third-largest carmaker, outpacing Japan’s Toyota and Germany’s Volkswagen Group by selling an accumulated 3.29 million cars globally. The Korean automaker had been in the top five for the last 12 years.

The solid profit has laid the foundation for Chung’s ambition to turn the carmaker into a smart mobility provider that puts it up against EV competitors like Tesla, who sold the most EVs globally — 6.6 million — last year. Hyundai sold the fifth most at 4.7 million.

On Wednesday, Hyundai Motor Group announced that it would invest 18 trillion won by 2030 for software-focused mobility development and offer customized connected car services such as over-the-air software updates for all cars by 2025, vowing to make sure that all Hyundai and Kia cars are up to date at all times.

In comparison, all Tesla cars began receiving over-the-air software updates that add new features and enhance existing ones over Wi-Fi from 2012.

“Through big data created from millions of connected cars, we will create unprecedented values and possibilities, offering customers with customized software updates and subscription services,” Hyundai said in a statement.

Hyundai said it would also develop software-based mobility devices and solutions to enter the future mobility and logistics market, so that its future mobility lineup, comprising those such as the RoboTaxi, advanced air mobility, purpose built vehicles and robotics, will sync to each other.

“There is no doubt that Tesla is the sample model for Hyundai and it is true that the Korean carmaker is constantly seeking what it could do the best to become like Tesla,” said Kim Pil-soo, a professor of automotive engineering from Daelim University.

It won’t be an easy road ahead for Hyundai to become a software-focused automaker taking on Tesla who recorded double-digit operating profit at 14.6 percent in the Q2, compared to Korean carmaker’s 8.3 percent, according to market experts.

A Hyundai Motor Group official admitted during a Q&A session with journalists Wednesday that it has been difficult to establish standards for software updates with partnering firms because they needed to agree on the same starting line for the standardization and said that the corporation was in the process of making new standards together with its partners. Hyundai currently works with thousands of subcontractors for auto parts.

Chung sought to transform Hyundai Motor Group, notorious for its militant culture, even before he took over. He promoted open thinking among engineers by hiring foreign professionals and design gurus. Market experts have credited Chung for pushing ahead with the luxury brand Genesis and improving the product mix with eco-friendly models in the global market.

“Due to COVID-19 and the supply crunch of automotive chips, the automaker diverted toward selling high-priced Genesis and SUV models, actively working on normalizing production and sales by even paying more incentives to dealers in the overseas market,” said an industry insider.