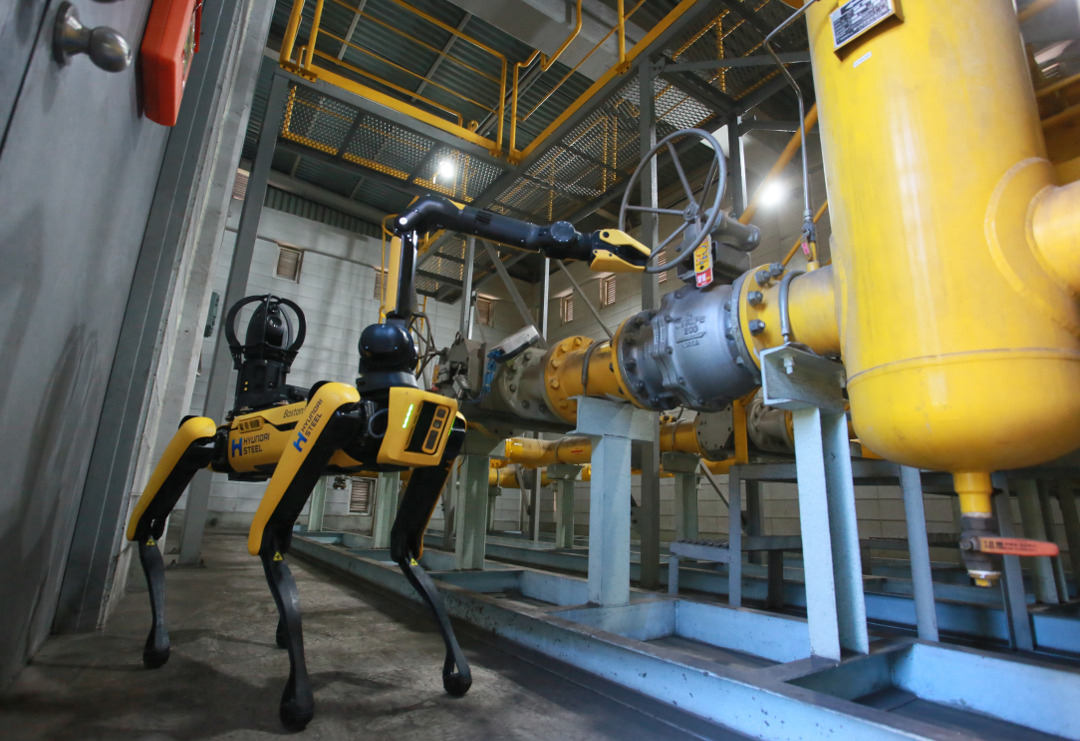 Robots that resemble animals such as dogs or snakes patrolling industrial facilities will soon be a familiar sight as manufacturers look for high-tech solutions to prevent human casualties or injuries which could hold them legally responsible.

Hyundai Steel Co. is testing a four-legged walking robot to help prevent damage to humans in case of accidents or disasters.

The robot, called Spot, can check whether oxygen gas valves are open or shut and inspect areas that pose safety risks. Therefore, it can help prevent secondary disasters such as explosions and fires to protect workers, Hyundai Steel said.

In recognition of the steelmaker’s investment in robots for safety, it won a process safety management award from the World Steel Association (Worldsteel) for Spot.

Hyundai Steel’s Dangjin Steelworks introduced the quadruped robot to keep workers from being exposed to explosion risks and related accidents, Worldsteel said on Tuesday, adding that the company’s target is to make use of the robots in 156 gas facilities and 2,927 locations in confined areas.

The robot dog will also wear smart safety devices such as gas sensors, cameras using Internet of Things and use artificial intelligence technologies to help keep people safe at times of accidents, the steelmaker said.

It will be used for checking on gas hazard zones, as well as early detection of fires and chemical leaks. It will also be used for risky jobs such as inspecting closed spaces with higher risks of gas poisoning and suffocation, so people do not have to do them. The robot will also check whether workers are wearing safety gear to help create a safer work environment, the company said.

All of this will be possible as the four-legged robot will be wearing high-tech thermal imaging cameras that can zoom up to 30 times, rotate to film 360 degrees and film 170-degree panoramic videos to accurately capture the situation on the spot.

SK Innovation also deployed two robots to its Ulsan Complex, a petrochemical plant, to improve the working environment of its employees by safely managing its facilities.

The two robots include the quadrupedal Spot made by Boston Dynamics and the remote visual inspection and surveillance robot Guardian S made by Sarcos Robotics, according to the company on Thursday.

These two robots will be used to navigate the 8.26-million-square-meter Ulsan Complex and conduct safety checks on areas of the plant’s facilities that are hard for humans to reach.

These areas include narrow spaces between pipes and equipment, where the robots can detect any malfunctions with a camera attached to their bodies.

Spot, which moves like a dog, and Guardian S, which moves like a snake, can also detect temperature, gas, noise and vibration differences in their working environments. SK Innovation hopes that the two robots’ functions will contribute to preventing accidents and enhancing its plant’s safety.

“With the introduction of the two intelligent robots, SK Ulsan Complex will be reborn as a more advanced and safe workplace. We will actively seek various digital transformation opportunities in the Ulsan Complex,” said an official from SK Innovation.

Hyundai Steel and SK Innovation are not the only two companies testing collaboration between robots and humans at industrial sites in Korea.

“Robot dogs are very beneficial devices in that they can inspect and take action in real-time in times and places that are beyond human capabilities,” said an official from Jungheung Construction.