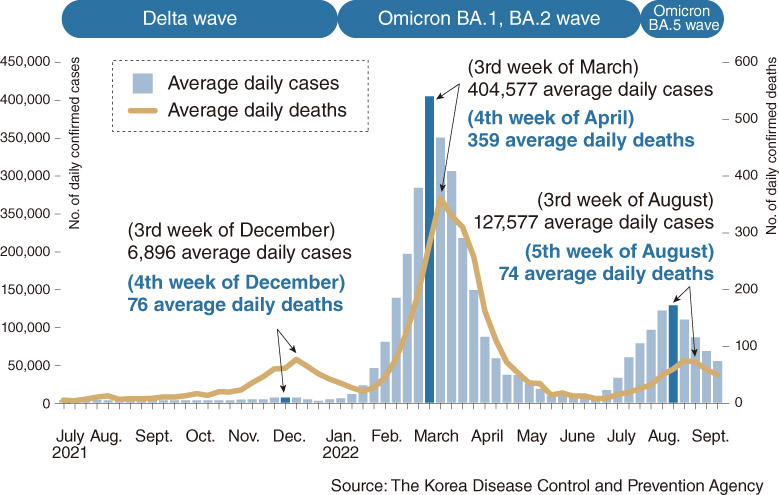 The South Korean government says the resurgence of COVID-19 this summer has subsided without leading to a spike in hospital admissions or deaths, despite social distancing rules being phased out.

In recent briefings the Ministry of Health and Welfare called the summer resurgence, triggered by omicron’s BA.5 subvariant, “the first large wave of COVID-19 the country has gone through without social distancing.”

“South Korea was able to minimize critical and fatal cases in the absence of population-wide social distancing,” the ministry said in a press release.

“What’s notable about how we handled the latest wave is that small businesses weren’t hurt and people weren’t inconvenienced by COVID-19-related restrictions while also keeping the case fatality rates one of the lowest in the world.”

According to the figures provided by the ministry, South Korea’s cumulative fatality rate stands at around 0.11 percent. By contrast the Organization for Economic Co-operation and Development average stood at 0.79 percent. As of early September, there had been 52.8 COVID-19 deaths for every 100,000 people here, which is also far below the OECD average of 213, the ministry said.

The ministry said that, despite having less hospital beds than in earlier in the spring, the scale of hospitalizations that occurred over the wave has “fallen within manageable limits.”

The number of newly admitted critical care patients peaking at over 597 on Aug. 29. The highest one-day death count was 112 on Sept. 1. Ahead of summer, the ministry said it has prepared the health care systems to be able to respond to an outbreak the size of 280,000 cases and 112 deaths at its peak.

Overall the toll from the BA.5 wave was much lower than the wave of earlier omicron subvariants that hit in the spring.

August’s case counts have averaged at 111,951 per day, which is only about a third of what was seen earlier during the first omicron wave in March. The deaths counted over August were also considerably less at 55 per day on average. In March, it was 264.

The case fatality rate was around 0.05 percent over the course of the summer BA.5 wave, which is just half of 0.1 percent observed during the wave of earlier omicron subvariants, according to the estimates provided by the KDCA.

The ministry said this was partly attributable to omicron’s reduced ability to cause severe disease compared to its predecessor delta, as well as the wider distribution of oral antivirals and second boosters.

Compared to Feburary and March, the prescription of oral antivirals among patients in their 60s and up has nearly doubled, the ministry said. By mid-August, the rate of fourth dose or second booster vaccinations among 60-somethings and older was also higher at 45 percent, marking a climb from 29 percent in May, when eligibility for the age group had just opened.

“The improved access to the oral drug and second boosters for vulnerable populations is likely what helped keep the severe disease and death rates relatively low,” the ministry said.

The ministry noted that the incidence of outbreaks at high-risk facilities has dropped following an increase in second booster coverage. By the second week of August, at shelters for homeless people and care homes for people with disabilities across the country, the rate of second booster vaccinations was 57 percent and 38 percent, respectively.

“At the peak of the wave in August we had seen around 113 outbreaks involving vulnerable facilities. In March there had been about 273 such outbreaks,” the ministry said.

The ministry said the experience of keeping COVID-19 under control without restrictions provides a basis for maintaining a “targeted approach” in future response — meaning taking protective measures for vulnerable people, rather than having restrictions that affect the entire population.

“Rolling back restrictive interventions at a nationwide level which exacts large socioeconomic costs is no longer sustainable,” it said.