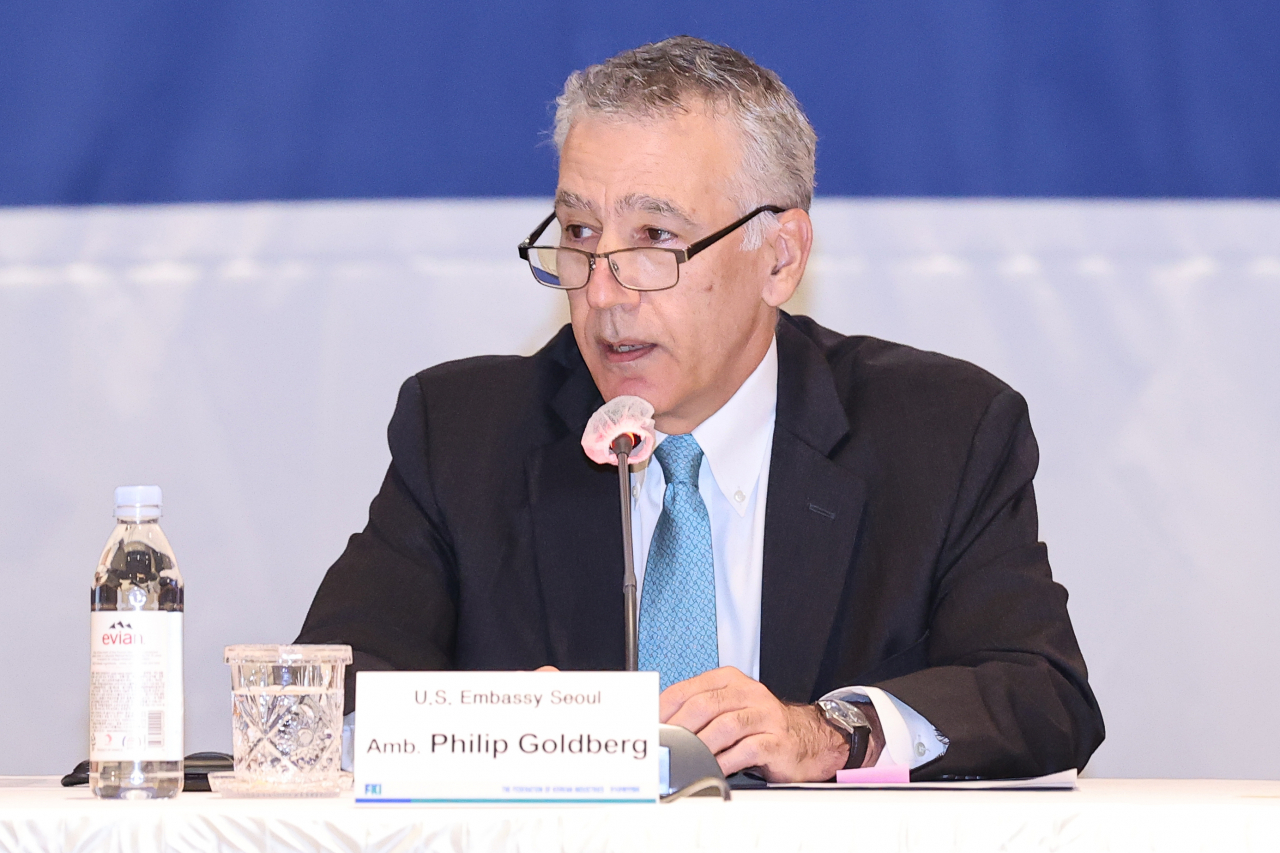 The United States remains “fully committed” to enhancing the economic partnership with South Korea and open to talks as close allies, the top US envoy to Seoul said Thursday, amid mounting concerns over the new US law on electric vehicles (EVs) that Korea has called discriminatory.

The South Korean government and industries have raised serious concerns over the US Inflation Reduction Act (IRA), which calls for giving tax credits to EV buyers only if the cars were assembled in North America.

Korean businesses have voiced the need to allow exceptions for Korean automakers.

“We’re very aware of concerns regarding portions of the Inflation Reduction Act, IRA,” Ambassador Philip Goldberg said at the 34th Korea-US Business Council, co-hosted by the Federation of Korean Industries and the US Chamber of Commerce.

“While we acknowledge these concerns and are open to consultative dialogue as close allies, I want to reiterate our full commitment to our economic partnership. The US-Korea business ties are strong and long standing and we want to make them even stronger.”

South Korea has said the unequal provisions in the law, enacted in August, will deal a heavy blow to the Korean companies, like Hyundai Motor Co. and Kia Corp., as they make EVs at domestic plants for export to the US

On Tuesday, Goldberg said in a separate forum that the allies had been discussing ways to resolve the issue, notably on how to deal with the “lag time” between Korean automakers’ EV production and the completion of Hyundai’s EV plant it is building in the US state of Georgia. He didn’t elaborate.

The IRA also affects Korean battery makers as it will require EV batteries to be made with a certain portion of minerals mined or processed in the US, or countries or regions that have free trade agreements (FTA) with Washington. The required portion of the components will increase over the years.

At Thursday’s conference, South Korean business circles voiced the need for the two governments to swiftly come up with a solution.

“The implementation of the IRA is already having a real impact on sales of Korean products in the US, and countermeasures seem urgent as public opinion here is worsening,” Huh Chang-soo, chair of the FKI, said in the opening speech.

“As Korea and the United States are the closest allies in the fields of security and economy, I hope that the current challenges can be wisely resolved between the leaders of the two countries,” Huh said.

South Korea has been making all-out efforts, at both the government and business levels, to create exceptions for Korean-made EVs.

The lobby groups were expected to adopt a joint statement later highlighting their commitment to resolving the IRA issue in a way that would minimize the discriminatory elements.

“It’s important for the two governments to help ensure businesses operate stably even if anything unexpected happens within the supply chains,” he said.

The participants proposed Korea and the US sign a permanent currency swap or a measure equivalent to that, so as to enhance the stability of the Korean foreign exchange market.

Among other key participants at the meeting were Foreign Minister Park Jin, Trade Minister Ahn Duk-geun, Octavio Simoes, president and CEO of Tellurian Inc. and Charles Freeman, senior vice president for Asia at US Chamber of Commerce.

This year’s council meeting took place in person for the first time since 2019, following the two previous virtual sessions due to the coronavirus pandemic. (Yonhap)